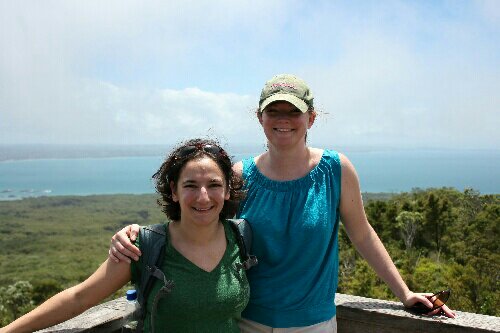 Rebecca and I atop Rangitoto.

Hello again, Danielle here. We just spent days one and two in Auckland, whose Maori name roughly translates to City of Many Lovers. Fun fact, brought to you by Lonely Planet (honestly, what would we do without LP). We really enjoyed our stay here, and though we didn’t see a ton of lovers (at least not openly displaying it), we did climb many, many hills, or at least the same hill 6 times from the supermarket to our hotel.

Auckland is a city surrounded on two sides by water. The side we spent two days exploring was the eastern side. It’s a fairly common big-ish coastal city, not unlike San Francisco, and contains a ferry building, a very cute marina, a pretty standard art museum, and some really good restaurants (if you go, visit Soul Bar – good view and GREAT food). The only thing that was strange was the shockingly small number of people. Apparently residents escape the city between Christmas and New Year’s, which we decided was very civilized of them.

The weather here is unpredictable to say the least. They say that you can experience four seasons in a day, but what they really mean is four seasons in an hour. It went from sunny to windy and pouring rain in literally no time at all, catching us in it a few times, but also giving us the satisfaction of staring at other people caught in really terrible downpours while we sat enjoying our dinner; schadenfreude at its best.

Walking around Auckland gave us the opportunity to get used to traffic flow in New Zealand. As you may know, they drive on the left side of the road here, and the steering wheel is on the right side of the car. It was my first time experiencing this, and it is trippy. As a pedestrian, I didn’t know which way to look for oncoming traffic when crossing at an intersection, and I was kept thinking cars were driving themselves, since the driver’s seat seemed empty. We rent a car at our next stop in Rotorua, a manual too, so it will surely be an experience. I might be the first member of my family to get a speeding ticket for driving too slowly.

The highlight for us was definitely Rangitoto, the small volcanic island just offshore. For $27NZ, one can take a very quick and comfortable ferry to this tropical gem, which offers visitors a semi-challenging 60-minute hike to the top, about 900 feet up, and a truly breathtaking view of the Hauraki Gulf. Another highlight besides a good day’s exercise in June tropical heat (no kidding, it is lush and prehistoric looking, and you’ll sweat like you’re at the world’s most beautiful outdoor sauna) is the short trip off the main trail to the lava caves. Rebecca saw the tiny entrance and immediately wanted to crawl in, but I was much more reluctant, thinking it would be tiny and sharp throughout. And since the only people I saw emerging from caves were small children, I decided not to try it out. But Rebecca did and soon realized that I had the only light source – the camera flash – so persuaded me to enter with her. And lest I put the camera in the hands of an amateur, I obliged.

It did not disappoint. Though the entrance was a bit of a strain on my rapidly aging knees (because I was NOT putting my butt on the ground in there), a few feet in offered a giant room. The camera didn’t want to take pictures, but I forced it to, so we have a few shots. It was so big Rebecca could have jumped three feet in the air without conking her head. There was a German girl in there with us, and she was smart enough to be using her cell phone as a light source, which beats the rapid flash of the camera any day. We climbed out – me in a very hobbit-like way, I might add – and headed to another cave, which was even bigger but much slippier. Rebecca fell a few inches, but was OK enough to hike back to the dock on her own, thank goodness. All in all, Rangitoto was AWESOME, offering great views for adults and great places to hide for the youngins.

3 thoughts on “Auckland, the City of Many Hills”