The first leg of our trip is now complete. We are now on our way to Vietnam (easiest border crossing ever, btw), having spent three weeks in Cambodia. We have seen an incredible amount of things here. From Angkor Wat, the world’s largest religious complex, to the Tuol Seng genocide museum, a monument to the horrific acts of the Khmer Rouge, to the beautiful tropical island of Koh Rong Saloem, we have experienced a great deal. Now we head to Vietnam for our next adventure, having learned a few things about Cambodia and ourselves.

To begin, I want to say that I think we have been most impressed with how the country is getting along fewer than 40 years after the horrific rule of the Khmer Rouge. In the four years of their rule, upwards of 2 million people were killed. An entire generation of intellectuals was wiped out. And yet a generation and a half later, things seem to be improving at an incredible rate. We saw construction everywhere we went. Schools every block in Phnom Penh. Nice museums. And artwork dedicated to the cessation of violence everywhere. We could use a little of that in the US, if you ask me. Another plus: not many policemen with weapons brandished about. The few officials we saw were unarmed, and though they are not exactly the hardest working government representatives, or the most honest perhaps, we never did feel threatened or like we were in some kind of police state. In fact, I would say that other than at the border crossing with Thailand, which flummoxed us, not once did we ever feel threatened or uncomfortable.

Our second most significant takeaway is that we worry way too much given how lucky and privileged we are. Cambodians live on maybe a few dollars a day, and compared to what we consider poverty at home, they are completely destitute. We witnessed a shocking amount of poverty. We have so much, and yet worry. What is it that we have to stress about, exactly? Do we really need to have as much as we do? Now, I’m not saying that we are the only ones in the world who worry about trivialities while everyone else is struggling to survive, because that’s not the case. But I do think that in the face of those who have to deal with hunger on a regular basis, have no running water, power, or three quarters of the things we take for granted, we should focus on being thankful and remembering the privilege we have. And we should worry less about amassing great wealth and instead focus on being happy, particularly happy with less.

My third takeaway has to do with the book I read about the Khmer Rouge, The Gate by Francois Bizot. Bizot was imprisoned by the Khmer Rouge at a prison camp near Battambang on suspicion that he was a CIA agent. In fact, he was a French citizen researching Buddhist practices during the Angkorian era, working at Angkor Wat. The person who was his interrogator was the infamous S-21 torture camp leader, Duch, though this was years before he wound up in charge at Tuol Seng. The author developed a kind of bond with the man, who was bright, educated, and completely believed in what the Khmer Rouge was trying to do. Naturally, he was full of contradictions, and ended up being batshit crazy and a horrible genocidal maniac. Half of the book was devoted to the prison, but once he was released, he wound up as a translator at the French embassy, trying to get people out of Phnom Penh when it fell in April 1975.

Of the many things I learned from The Gate, the thing that really resonated with me was the courage this man exhibited in the face of such brutality. He repeatedly stood up for himself and for others, asking for food, water, advocating for a dignified existence (asking to be allowed to bathe, for instance), and in general resisted more than I would have thought possible for someone in that position. I would be terrified. And it would not have entered into my head to defy my captors the way he did. But what I decided was that he had to. He was constantly an inch from death. So why not try to push? They’re going to kill you anyway, right? Naturally I cannot imagine ever being in such a situation. But if I am, I hope I demonstrate half the guts that guy did. He didn’t fight, he didn’t run away or put himself in more danger, but he did do what he could to shame his captors into improving his situation and that of everyone in the embassy he worked to protect.

On a lighter note, I would last say that Cambodia could really use some real English translators. Some of the sign translations we saw were truly horrible (see this one explaining the rules of being on the beach in Sihanoukville- our favorite rule was “No gangster.” We couldn’t quite figure out what that meant, but I stopped wearing my hat backwards just in case.), and though it was amusing, we saw no reason for it to be that way. Maybe we should get jobs re-translating English signs into, well, English. 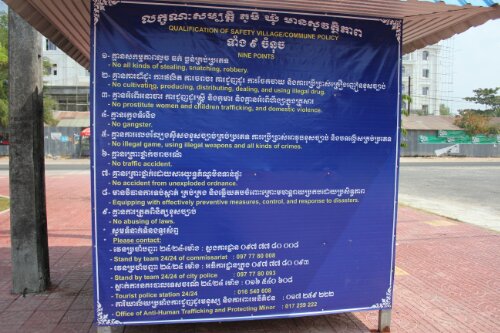 I hoped this trip would change my perspective a little bit, and so far it definitely has. I’ve been watching other people, observing, and reading interesting books that have made me think. Now I am entering Vietnam, a Communist country with the most complicated US relationship I will experience, and I am excited to learn and grow even more. I promise to keep you updated as the adventure continues.